We’re currently experiencing a tech boom, with a striking amount of positions across the tech industry in high demand, notably in code. Yet it’s becoming increasingly difficult for businesses to recruit for these roles and retain the employees.

With an estimated 100,000 jobs waiting to be recruited for in the tech sector and almost 500,000 more roles on average becoming available in the next few years, coding is a highly valued skillset in and out of the tech industry.

The jobs are waiting and the pay is extremely lucrative, so what is causing the skills gap and the number of unfilled jobs to continue to rise?

There are a number of dangerous misconceptions surrounding the people who work or want to work in code. From stereotypical personality traits to their gender, it’s alarming that these misconceptions are still very much alive in today’s society.

We’ve shared the top misconceptions, why they’re fatal to the coding industry and introduce some incredible coders who are smashing the stereotypes to make positive steps forward in the industry.

Underrepresentation in the coding sector is a problem and one that isn’t being discussed enough. Unfortunately, there’s still a stigma around these roles that’s been implemented predominantly through pop culture. This has resulted in a strong stereotype that is very much alive and kicking.

Stack Overflow conducted a developer survey, getting interesting and detailed responses from over 100,000 developers about how they learnt to code and all about their careers now. They also received personal insights, such as their race, gender and age.

Here are the demographic take aways we found most intriguing: 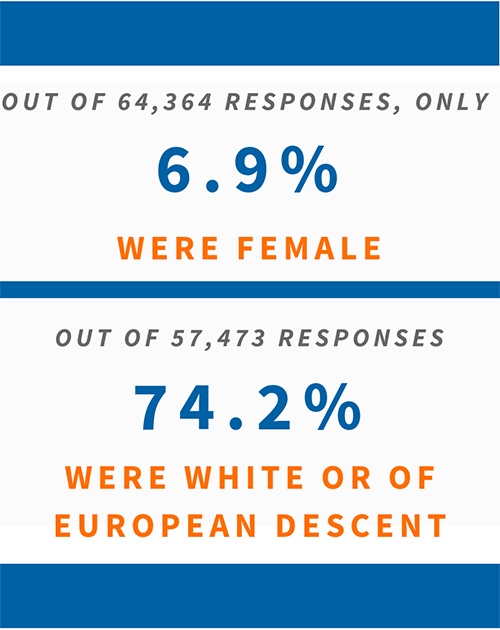 The lack of representation in coding may worry you, but there are amazing coders out there striving to present inclusivity within the industry.

Alysha is a software development engineer at Microsoft and has told us just how present the typical stereotype is on people who work in coding roles. She’s passionate about working to make a positive change in the industry and has said:

“You will find in reality, it is completely the opposite and I am determined to change this perception.”

In addition to underrepresentation, there are a number of misconceptions around the personality traits of a successful coder. A guy, tech ‘geek’, in a dark room, un-kept, tapping ferociously at their keyboards whilst the world is ending around them. You can picture it, can’t you?

From the same Stack Overflow survey, they dismissed these personality stereotypes by hearing from real life coders working in a variety of roles and industries.

These are our favourite personality misconception take aways: 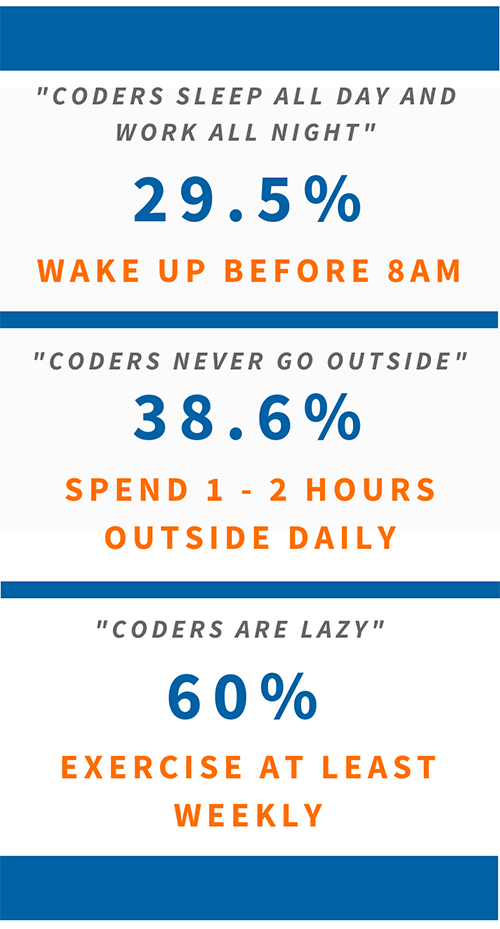 A common error that people believe is that if you work in coding, you work solely within the tech industry. This isn’t the case at all. There are coding roles in a variety of exciting and progressive industries, this, of course, includes but is absolutely not limited to tech-based businesses.

Industries such as retail, healthcare and media all have a need for qualified coders for a variety of stimulating roles. Even the Natural History Museum in London uses coders to create interactive fun for its visitors. Jade is the junior software developer at the museum and told us about her role there:

“My work consists of building cool new interactives that are displayed on screens throughout the museum, that either consist of games for children or sources of information that people can click buttons and interact with.”

I won’t believe you if you think that’s not an incredible job in code. It’s enough to make anyone want to start their coding careers.

It’s critical to overcome these misconceptions if the code industry skills gap is going to cease in the future.

We’re on a mission to move forward from these issues in the coding industry and work towards making positive changes for individuals and businesses. If you want to progress your career in coding, but unsure because of any of the issues mentioned above, another inspirational coder is Lyndsey Scott; model, actress and coding queen.

Be part of the change to create a positive difference in the industry and your life. Contact our career consultants today.